Pic opens in new tab: My Magic DragonKnight. He is the coolest ever :D I know “everyone” is stamina nowadays, but that´s no fun so we keep on going ;) I still have a lot of zones in game I havent explored so Im having a lot to look forward to. For example The Dark Brotherhood…. and Craglorn.

And this week ESO is having a one year anniversary to celepbrate Orsinium. One of the most beautyful zones in game. Join!
The vid from 1 year ago:

At last my DragonKnight, who started his adventure first week in september, has reached level 50. And voilá 315 champion points instantly :D

I took its time but its worth it. He will be the one who continues to pick champion points for my healer. I figured the healer is too slow to level so I thought better to level a dd for that task ;)
On the first pic he is skeleton due to the Halloween event but this is how he looks behind the mask:

So now the grind for gear and more champion points begins (315 atm). But it doesnt feel much like a grind as he has tons of content to dig through in this amazing and wonderful world of Tamriel.

Shared: One Tamriel, a game changer

Pic my own; my lvl 40 dragon knight 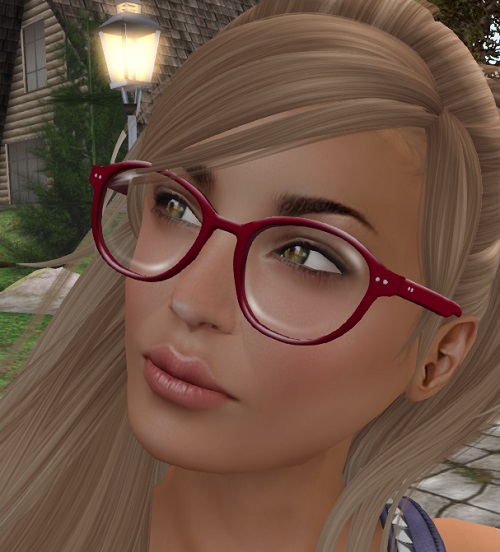 My virtual life is just an extension of my real life. I have found a way to build bridges to friends in real life and trying not to let my gaming take too much time either. To find the balance and concentrate more on endgame irl :P

So I think this blog may have come to an end. I have used it as a diary of my virtual life and gaming but I just dont find the time to blog much nowadays. So I will let it rest for a while. I may come back though, you never know ;)

Take care and game on! <3My

Though for the day – “Sometimes life touches one person with a bouquet
and another with a thorn bush,
but the first may find a wasp in the flowers,
and the second may discover roses among the thorns.”
~ Billy Graham

Nothing Compares 2 u – Tamriel

-I promise I only visit my friends in ArcheAge, dont be upset:)

I still have some friends in AA who is dedicated to that realm. I want them in ESO but I suspect they will be the last ones left in AA when they close the servers. I accept they have found their home in the metaverse and its ArcheAge :):) So I downloaded the game one more time to be able to visit them now and then:) AA is totally confusing to me as usual. When I visit AA I miss ESO even if its just for a short while. Elder Scrolls Online has really got under my skin >.>

And it has a lot to do with my guild Swedish Legion. We have so much fun doing pvp, dungeons and trials together or just hangin in TS while questing or crafting. To find a nice guild and friends to play with is what makes the difference in an mmo, for me anyho. And enough ppl so its possible to do content together of course.

But if i didnt have anyone to play with I would still play ESO and not ArcheAge or any other mmo. Because ESO is great to play alone too and not many mmo have that kind of quality. Brilliant questing, 1 man dungeons, group finder, pvp, crafting and tons of achievements for solo players.And the graphic quality…

Don´t mess with our Elder Scroll

Most fridays Swedish Legion is hanging around in Cyrodiil, the huge pvp area, for some fun and relaxation. Its sort of a tradition. Mostly in the Haderus campaign. It was fun as usual even though the blue team (Daggerfall Covenant) was under some pressure.

The great thing about pvp in ESO is that you can attend pvp in Cyrodiil from lvl 10 already. You will be scaled to max lvl. So everyone can join:)

The pic is from when “the blue team” had taken the scroll back from the enemy alliance: 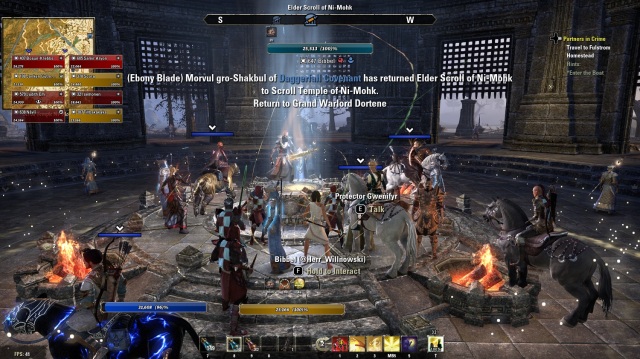 This Sunday we will go for 12 man trials, I hope i dont miss that:)

One Tamriel – The Future

In Cyrodiil the other day: “Will the zerg discover me if I AFK here?”

One Tamriel is on its way and you dont need to be in Cyrodiil to duel anymore. This and much much more. I´m so excited :D 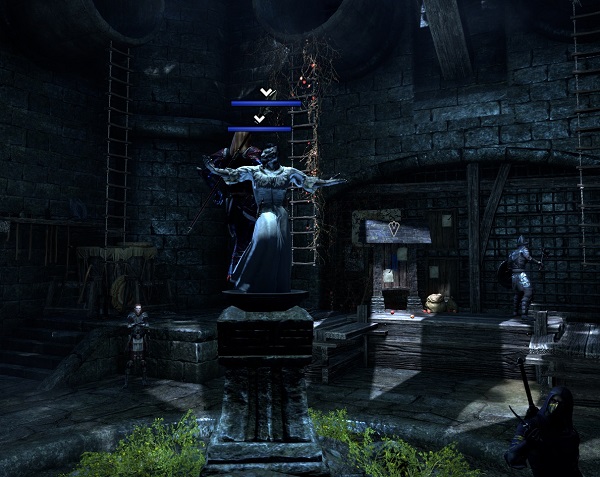 This friday we started as we often do, down in the sewers of Imperial City (pvp and pve). Jonken and Waitsen entertained us dancing on the pillars to boost the raid. We ran around killin Molag and different bosses for a while (and some yellows too ^^). We lost some stones on the way home as we were split up. I ran into a flag boss and got insta killed and someone got ganked but we got most of the loot back to base anyho and my focus is first to have fun, second the stones:):)

It was friday and most of us was at least a tiny bit sloshed ;) Despite that one of the officers, Jolla, suggested we should do a proper trial instead as we were a full group. So why not? We started in Hel Ra Citadel… 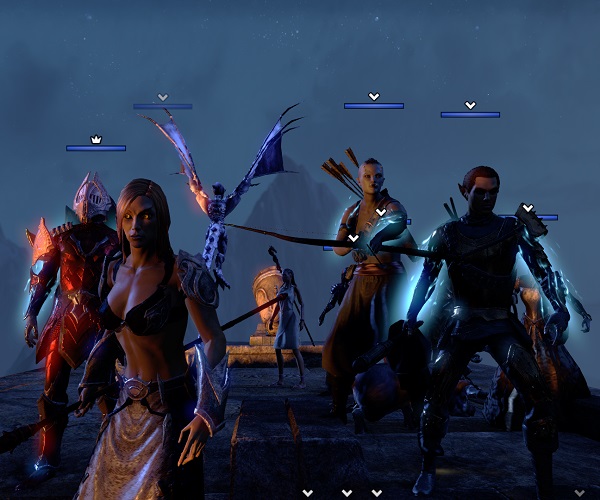 I was sure we were going to wipe as Iv had a glass of wine and was supposed to keep ppl alive :S But it went smooth, even if someone had brought a swine who tried to be focused in my fancy and heroic pics (almost not visible in the pic above though) >.>

So after finishing Hell Ra successfully we decided to go for Aetherian Archives: 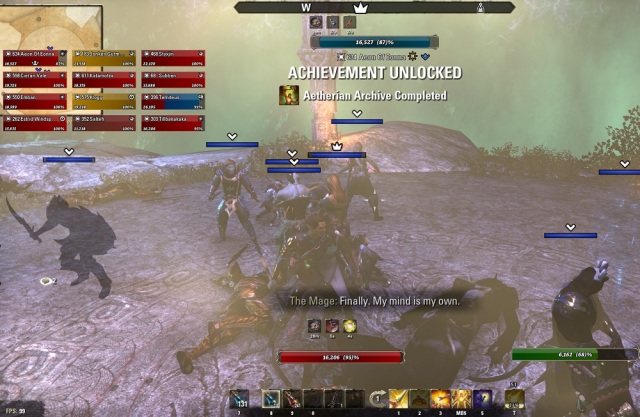 We did that without many casualties too! Both was first time for me as healer but the group was solid so no problems (and we had 2 healers).
After this i decided to hug my pillow while some of the others continued the adventure:):) I had so much fun this friday I didnt want to sleep :( 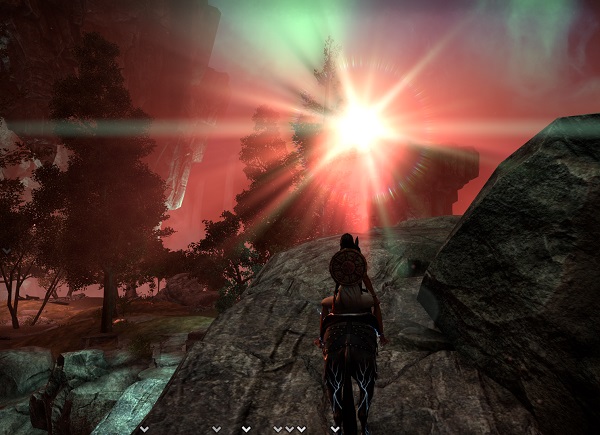 “I died, but that was only the beginning ….
I awoke in Oblivion. My body is intact but my soul has been torn from my body. I must find a way out of this nightmare place to reclaim what was lost to me, or I will be damned for all eternity. I need to find a weapon. There are a number of racks nearby. I should have plenty of options.” ~ ESO Wiki

This monday Lyris found a dark, pale eyed Dunmer in a cell in The Wailing prison in Coldharbor. First thing he said was “For the Covenant” when he woke up. Strange, as he obviously is a Dunmer? But he has lost both his soul and his memory so until he can recall what he´s been up to before the prison we can be fairly sure he was living in Daggerfall Covenant somewhere…

He also has a strange accent, sounding like a mix of cockney and south African english. But he is quite chatty and social, not at all introvert and cold like Dunmers have a reputation to be. Not very “dunmerish” at all quite frankly. He seems all cheerful, flirtatious and happy going. Anyho (or maybee that´s why? ;) Lyris took him under her wings and fast enough he got out of his prison.

He was a bit confused in the beginning, starting fires all around Cold Harbor. So she gave him a suitable nickname (“The Fire fighter”, but in Swedish ;) I guess you know by now he is a Dragonknight and a Fire Mage >.>

Eventually he ended up in Glenumbra, got a shower, some armor and voila, not bad! :D
In the pics above he is celebrating his freedom with a glass of wine outside the crafting
station along with his “good for nothing” but cute pet, Birdie Nam Nam. I suspect one of his goals is to be tanking in endgame but that is far far away at his present level (7ish). Although u have to have something to strive for. Im suspect he will mess up major but as he is member of the nicest guild around, Swedish Legion, im sure they are “dying” to play dungeon with him ;)